Women in Crypto: Interview with Eléonore Blanc, founder of CryptoCanal

Almost all species have their own unique social systems built upon needs specific to them – whether that’s food scarcity, survival in numbers, or other habitational intricacies. The importance of human social interactions is unmissable in everyday life. Think about our families, our corporate structures, our governments… the need to work together is evident everywhere.

When we look back at the history of cryptocurrency and how it got to where it is, we can see how integral a sense of community was and continues to be. The crypto ecosystem is built on that community spirit. In fact, it’s ingrained into the technology itself. Think about Bitcoin – it never had any marketing budget, instead, it was all word-of-mouth, online forums or community-led meetups and educational sessions.

Communities are vitally important ecosystems that need to be nurtured, but they don’t appear magically by osmosis. So who are the people that foster this unity across borders and cultures? We had the pleasure of catching up with one. Meet Eléonore Blanc, founder of CryptoCanal. Where it all began

A big eye-opener for Eléonore occurred during an exchange programme as part of her bachelor’s degree in Lebanon. “That was the first time I woke up and didn’t have water,” she said. “It was my first experience of serious inequality as a “wealthy” exchange student able to buy water to fill tanks, while most citizens living there can’t.”

Access to essentials like water is something many of us take for granted, but it’s an issue that’s plagued the globe for centuries. When it comes to financial services, it’s no different. For many developing nations, cryptocurrencies offer access to important financial tools for citizens who’ve historically been excluded from even the most basic banking resources.

Eléonore had applied for a position with the United Nations Development Programme in Mongolia, but her plans were halted by a Bitcoin meet-up. It was a life-changing meet-up in many ways.

“I showed up and there must have been around 100 people there – mostly men,” she says. “I sat next to two awkward guys who were real introverts and it was hard to socialise. That night was an ICO-pitch night, but I understood that there was something interesting going on – a technology, something called blockchain, then crypto. The cypherpunk narrative wasn’t the focus of that night.”

For Eléonore, it was a solution to the inequality she’d first experienced in Lebanon – a way to redress the balance and give essential services to those for whom they’d previously been unavailable.

Eléonore had caught the crypto bug at the height of bitcoin’s first bull run in November 2017 and she began volunteering for a variety of different meetups in the crypto and blockchain space. “That’s where I learnt a lot because I was hosting events, helping bring in guests. Eventually, I became Content and Community Manager for BTC.com, which was a non-custodial wallet for bitcoin and Bitcoin Cash (BCH) at the time. They were one of the first wallets to have BCH and there was a strong BCH proponent crowd. I was writing content for the wallet and users, post-fork, and everything. And that’s how I got sucked in – through meetups and that first job which really crystallised a lot of my learnings.”

In April 2019, Blanc felt empowered to start her own business: CryptoCanal, a platform offering education, business and marketing consultancy services for the crypto industry. After retrenchments at BTC.com, she realised that if she was going to work around the clock and be in this industry, she wanted to ensure her time was going to something worthwhile.

“This freed me. I realised when they had to let everyone go in December 2018 that, I gave my life to this job. If I’m going to work around the clock and be in this industry, I may as well work for myself. I resonated with the libertarian narrative of ‘be your own person’ and ‘be your own boss’.”

CryptoCanal hosted its first and last meetup in March, attracting many sponsors. Unfortunately, though, the pandemic meant meetup plans have been on pause for the time being.

Blanc almost went back to work for a really big, well-known crypto company, but through the whole interview process, it dawned on her how much autonomy she’d lose. “I was so used to being my own boss, having my own way of working and I loved being a consultant with my own freedom and clients. It was always about checking my values, and in the startup world, there’s more space for that kind of freedom.”

Right now, one of the most exciting projects she’s working on has been a long time coming: an educational crypto 101 programme tailored for a Lebanese audience. Having previously lived there and having a lot of friends currently living there, Blanc feels a connection with a nation absolutely poised to embrace crypto.

“I wanted to dedicate my life to something impactful. My passion for education, changing society and for offering people an alternative is so meaningful to me. And these are exactly the kinds of projects I can do because I’m free to choose whatever I want to focus on with no obligations to any company.”

Blanc also now offers free monthly cryptocurrency classes open to everyone every last Wednesday of the month – you can catch the next one on the 31st. If that wasn’t enough, she’s also recently started a podcast, Humans of Crypto, to shine a light on the people behind the industry. “The twist on my podcast is that guests have to be open and candid about their experiences and bring something they love with them to share with the audience!”

A community for everyone

When asked about her experience as a woman in the industry, Blanc gets the gender question a lot and hates the victim narrative that often comes along with it:

“The gender question comes a lot – like ‘oh you’re a woman, how do you do it?’ I hate the victimising narrative. I have difficulty excluding gender – we’re in an open, borderless system here, anybody can join. A lot of women are in finance and a lot of households across the world, they might just not be aware of alternatives.”

But the fact remains, there are far fewer women in crypto than men, and when it comes to understanding the disparity in representation, Blanc feels the cause is twofold. It comes down to education and the fact that when anyone first gets into the crypto scene, it’s very male-dominated which can be off-putting to women. If you only ever meet the so-called “crypto bros”, then you could be forgiven for thinking the industry is a contemporary rendition of the Wall Street boys club.

“If that’s your first and only interaction, then you might think, ‘this is weird. This industry is just about crazy traders gambling money.’ So I can understand why a lot of women may be like ‘uhhh, no, not for me.’ But I’ve also had the pleasure of meeting several women in the space who were fantastic, and everything-women – real, inspiring mentors. They’ve already fought this fight – be it in banking, traditional finance and tech. We’re not pioneers, but we’re lucky because of their hard work, we’ve got a voice here.”

And when it comes to working with women, Blanc noted how refreshing it is.

“They’re reliable and they show up on time. Sure, it’s a generalisation, but from my experience, they do what they say, they deliver and they’re conscious of your time.”

How more women can get involved

When asked what advice she has for women looking to get involved in the industry, Blanc shares a piece of wisdom she received from EuroNext CEO, Simone Huis in ‘t Veld: “Don’t be afraid to be yourself or to speak up in meetings. None of the men in the room have the same point-of-view that you bring to the table. You’re extremely valuable.”

The advice was especially profound because of the setting. Huis in ‘t Veld shared the advice when Blanc was ringing the gong of the world’s oldest stock exchange based in Amsterdam, having been invited as part of a Women in Tech event. The building itself is exactly what you’d picture a centuries-old, financial temple to look and feel like. After a tour of the legendary Beursplein, they had breakfast in an ornate gold-plated room. Up until at least the ‘70s, Only men were allowed in the very room she was in, and the woman responsible for taking meeting notes would have to sit right outside the door. Blanc reminded us that when we really think about it, it’s been just over 50 years that women have been accepted in the workplace outside of the typical socially constructed gender-based roles like nursing or teaching.

Being in such a male-dominated industry inevitably has some sort of effect after a while. Her advice for women is “Don’t lose your ‘woman-touch’. Do you have to be a man to be in this industry? No, and don’t lose yourself in the process. It’s easy to forget who you are in meetings surrounded by guys all day. But more than ever, we need that ‘woman touch’. And it’s hard – a lot of women have confidence issues, can’t speak up, or feel like they need to be overly prepared for everything. Just be yourself.”

Like most things, Blanc says, being yourself as a woman is easier said than done. Many women have issues with confidence or imposter syndrome due to negative experiences in the workplace or simply because of the way our society treats women. But if we’re building a new and improved financial system, it’s vital that women are part of the community and having their say at every step of the process. 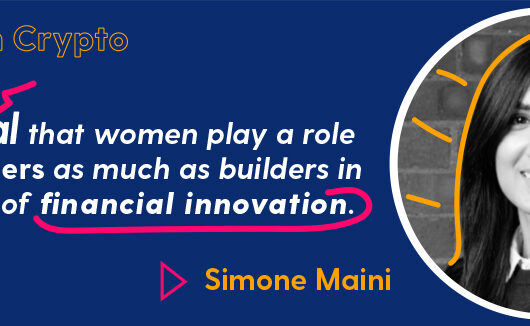 We recently sat down with Simone Maini, CEO of Elliptic, to discuss her career in the space, the importance of shutting down financial crime for crypto, and much more. March 18, 2021 · 6 minute read Crypto events to watch out for in December