Research Summary: The State of Crypto in Africa

Twitter and Square CEO, Jack Dorsey recently said “Africa will define the future (especially the Bitcoin one!)” But was he right?

Sad to be leaving the continent…for now. Africa will define the future (especially the bitcoin one!). Not sure where yet, but I’ll be living here for 3-6 months mid 2020. Grateful I was able to experience a small part. ? pic.twitter.com/9VqgbhCXWd

Earlier this year, Luno published The State of Crypto in Africa report in collaboration with Arcane Research. This was an attempt to understand where the future for crypto in Africa is headed. In this summary, we’ll highlight some of the key aspects of the research, including the catalysts for crypto adoption in Africa, obstacles to be overcome, and the latest trends.

Despite being an incredibly diverse continent, African nations often share key similarities, ranging from socio-economic issues to a significant lack of infrastructure. The use of cryptocurrencies around the world has, to date, largely centred on investment, speculation and trading. This is not true of Africa, where applications for crypto and the scope of challenges it could help overcome vary far more.

This makes it a fertile breeding ground for crypto. As the report notes that “Africa is one of, if not the most promising region for the adoption of cryptocurrencies. This is due to its unique combination of economic and demographic trends. While the overall adoption is relatively low, the potential is enormous, the growth is rapid, and the development is likely to become defining for the cryptocurrency industry going forward.”

However, there’s currently a polarity to crypto adoption in Africa. On the one hand, researchers have identified high ownership rates in certain countries. Google Trend data indicates Uganda, Nigeria, South Africa, Kenya and Ghana all rank in the top 10 on the topic of cryptocurrency, which demonstrates the growing interest therein. South Africa actually ranked third-highest worldwide at 13% with Nigeria ranking 5th (11%) in a survey about crypto ownership. In terms of crypto infrastructure, though, it’s lagging behind. There’s still a distinct lack of nodes, mining operations and supporting merchants. Of the 10,267 Bitcoin nodes worldwide, just 20 (0.2%) are located in Africa. Furthermore, research from CoinShares indicates there’s almost no meaningful Bitcoin mining activity across Africa. Trading volumes across non-P2P (peer to peer) exchanges indicate there is generally less than $10 million in daily trading volume across African currency pairs. Luno contributes to the majority of this volume.

On the other hand, Africa accounts for a comparatively much larger share of the P2P trading market. Trading across Africa now accounts for more than 14% of LocalBitcoins’ and Paxful’s global weekly trading volumes, with activity focused in Nigeria, Kenya and South Africa. These volumes have seen a significant boost in 2020, surpassing $10 million in weekly volume across the two platforms.

Africa’s underdeveloped crypto infrastructure aside, there are a number of major catalysts that could be conducive to widespread adoption over the next decade. Many of these are unique to the African continent, showcasing a remarkable opportunity for projects that are able to leverage the potential.

The majority of African nations suffer from high inflation rates – historically much higher than the global average. This drastically undermines purchasing power and the potential for wealth-gain. Bitcoin’s inherently disinflationary monetary model and decentralised governance therefore poses an attractive alternative. 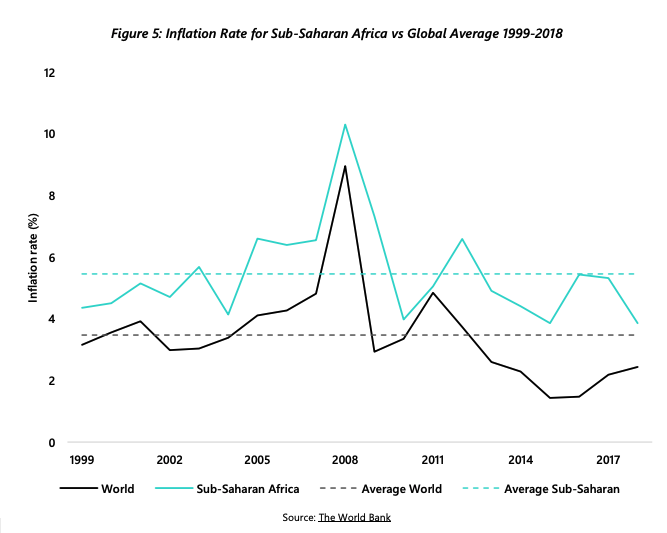 In the same vein, many African countries suffer from depreciating and often volatile national currencies. For example, the South African Rand (ZAR) has lost over 50% of its value against the US Dollar, while also being one of the most volatile FX currencies.

Most African nations suffer from vast political instability which exacerbates inflation and currency volatility. Data from the World Bank gives just nine of the 53 African nations with a positive score on the political instability index. Furthermore, 2019 registered the highest amount of civil conflicts since 1946. This type of vulnerability has an adverse knock-on effect on issues like forced migration, GDP collapse, and wealth confiscation.

Bitcoin and other cryptocurrencies are unique in that they combine the wealth preservation properties of hard assets, like gold and land, with the portability of digital currency, combined with an unparalleled degree of censorship resistance. These properties, in combination, make cryptocurrencies the ideal antidote to political chaos. Inadequate banking services and limited access inhibit entrepreneurship, business growth, lending and saving. These all work to drastically undermine economic development. Cryptocurrencies and decentralised finance (DeFi) are poised to take on the challenge of providing individuals with a safe place to store and interact with their money.

Cryptocurrencies offer a much easier and often cheaper alternative to remittance payments. Remittances below $200 to Sub-Saharan countries cost an average of about 9% compared to the global average of 6.8%. These exorbitant costs are a combination of an inefficient uncompetitive banking market and a reliance on legacy financial communications systems, such as SWIFT.

Despite improvements to traditional finance infrastructure, more exponential growth would require significant investments. With almost 60% of the Sub-Saharan population living in rural areas, mobile and digital solutions are far more equipped to tackle issues to access. Unlike other regions, many African nations have leapfrogged traditional finance entirely, going straight to mobile banking. This trend is ideally suited to cryptocurrency adoption.

M-Pesa’s success serves as one of the best examples of the growing dominance of mobile finance. Having debuted in 2007, it now has over 37 million active users, processing 11 billion transactions per year.

21% of Sub-Saharan Africans now use a mobile money service, with more users of mobile accounts than traditional bank accounts. A huge downside to mobile money services, though, is the hefty price tag with an average of 2% of a transaction’s total value. Crypto, on the other hand, offers far more competitive fees.

Along with the powerful catalysts expected to drive crypto adoption, there are a number of major challenges to be overcome. Some of the most prevalent are inadequate internet coverage, competition from mobile money services and hostility from governments.

Unlike mobile money services, most cryptocurrency wallets require internet connectivity to send and receive transactions. Only 39.9% of the African population have some form of internet access, compared to 62.9% across the rest of the globe. Seven African countries have internet penetration rates below 10%. A UN report recently estimated that a staggering $100 billion of further investment over the next 10 years to increase coverage to a reasonable standard.

The lack of coverage can be attributed to a lack of infrastructure and resulting high costs. Sub-standard electricity supplies are additional contributing factors. Many African countries have dispersed populations, often with low average incomes, which means there’s less financial incentive for companies to invest in infrastructure development. This results in a vicious cycle of poor connectivity and economic underdevelopment. As a result, telecoms operators monopolise and collude on pricing, undermining African citizens. Across the continent, 1GB of data on average costs 7.12% of a person’s monthly salary, reaching as high as 20% in some nations.

Satellites as a solution

Over the past few years, the satellite industry has grown tremendously. Companies like SpaceX, Amazon, Viasat and OneWeb are building low-orbit satellite mega-constellations that aim to provide high-speed internet across the globe. These will be particularly handy in rural and remote regions.

There’s also an increasing focus on the transmission of crypto payments without internet connectivity. To date, Blockstream has been the pioneer in this area, creating a satellite network with global coverage that broadcasts the Bitcoin network for free.

Blockstream joined forces with another decentralised communications company, goTenna, which allows users to transmit transactions without internet via its mesh network. It’s expected that satellite internet could compete with more traditional methods in the coming years.

Beyond internet connectivity issues, poor electricity coverage presents another roadblock. A jaw-dropping 57% of the population across the Sub-Saharan region still lacks access to electricity. The success mobile money services have enjoyed in Africa is a double-edged sword to crypto adoption. Adoption may struggle in the face of such dominance due to the business moats and network effects that have developed. However, these services have made users more comfortable with and accustomed to digital and mobile payment solutions, which could pave the way for alternative and more cost-effective solutions like cryptocurrency wallets.

While mobile money services rely on a centralised business model to operate, extracting fees and revenue from customers, cryptocurrencies can compete with increased functionality minus the negligible costs.

Although Bitcoin and Ethereum blockchains may not be as competitive, other options like Ripple, Bitcoin Cash and Stellar can offer on-chain transactions for far less. Second-layer solutions like the Lightning Network also have the potential to offer almost-free transactions.

Mobile money solutions have an advantage in the breadth of services they offer (yield on deposits, insurance and loans) but developments in the DeFI space should allow crypto services some market share.

The largest short-term hindrance for cryptocurrencies is unfavourable action from lawmakers and regulators. The legality of Bitcoin and other crypto varies significantly across Africa, with over 60% of African governments yet to clarify their position. North African countries have taken the most hostile positions, with Alergia, Libya and Morocco having all issued bans against the use of cryptocurrencies. The most common position, though, is one of caution. Countries like Kenya, Ghana and Zambia have advised discretion without actively banning them.

Luno appears to be the most popular centralised exchange platform with over 4 million customers. Launched in 2013, Luno has regional African hubs in Cape Town, Johannesburg and Lagos and processes approximately $4.5 million per day on average in 2020, mostly in the South African market. This is reflected in the overview of Luno’s fiat-to-crypto volume, where 75% of the trading volume has been in South African Rand (ZAR) so far this year. Not only are the African countries dominating on Luno’s platform, a large portion of the users are also based in these countries (75%).

By looking at cryptocurrencies not as an investment vehicle but as a global means of payment, it’s clear Africa is poised to embrace crypto as a solution to many of the persistent issues the continent faces. Most, if not all, obstacles to mass adoption can and will be overcome following investment in infrastructure and the creation of tangible applications that address issues unique to the African continent.

Education is an incredibly important aspect of the cryptocurrency space. If any new technology is to be adopted, users need to be empowered with the knowledge to make sound financial decisions for themselves. While the technological and economic benefits are there, without direct action and a firm grasp on the potentials, regulators and citizens alike won’t be equipped to adopt crypto in any meaningful way.

What is an off-chain transaction?

An off-chain transaction takes place outside of the blockchain, and is often defined as a second-layer protocol. 1 minute read What is a dividend?

Dividends are paid to a company's shareholders as a reward for investing in the company. 1 minute read