The Bitcoin mining community has resoundingly voted for the Taproot upgrade to the Bitcoin network and it’s now expected to be implemented around the end of 2021. The upgrade is primarily aimed at improving the privacy of multisignature (multisig) transactions and unlocking the potential for smart contracts to run on Bitcoin, planting its tanks firmly on Ethereum’s lawn. The upgrade will also make it cheaper to transact on the Lightning Network.

Is Patel correct? How important have upgrades to the Bitcoin network proved in the past and will this have an even greater impact?

Updates to open source blockchains such as Bitcoin are agreed by members of the Bitcoin network. On the Bitcoin network, a person or group of people – usually someone who holds serious sway at Bitcoin Core – makes a proposal. Miners then vote on whether or not the proposal should be implemented on the existing blockchain.

When the majority of users on the blockchain accept the upgrade, and miners continue to mine blocks in that chain, it’s known as a ‘soft fork’. If developers are unhappy with the confirmed changes though, in the past they’ve gone so far as to jump ship and create their own blockchain. This is called a hard fork. Bitcoin Cash, for example, was a byproduct of the so-called ‘SegWit’ upgrade in 2017.

The success of a blockchain depends wholly on how much adoption it sees by its users. The more users and miners, the better; if no-one engages with a blockchain, it’s like a carnival ride without fairgoers, a pinball machine without a pinball… It simply fades into non-existence as users dwindle, and it is usually followed by the disappearance of nodes.

The first major Bitcoin fork was proposed in 2014 by Mike Hearn and Gavin Andresen, who, at the time, were both senior developers at the Bitcoin Foundation. Bitcoin XT aimed to speed up transactions on the blockchain from seven to 24 transactions per second by increasing the block size from 1 to 8 MB. The downside being that it would increase the amount of memory needed to keep a record of the entire blockchain on the various nodes.

“I feel sad that it’s come to this, but there is no other way. The Bitcoin Core project has drifted so far from the principles myself and many others feel are important, that a fork is the only way to fix things,” Hearn said in a message sent to a Bitcoin developer mailing list. Support for Bitcoin XT soon withered and the coin was eventually abandoned after failing to draw mass support. The story didn’t end there though…

Upgrading the Bitcoin network is a long and tedious process. The segregated witness consensus layer (SegWit) upgrade was first proposed by Bitcoin Core programmer Pieter Wuille in 2015, and was only implemented in August 2017.

Opponents of SegWit did not go gentle into that good night. The ensuing fracas came to be known as the Bitcoin Civil War, which resulted in a hard fork from the Bitcoin blockchain and the creation of Bitcoin Cash.

The main difference between Bitcoin and Bitcoin Cash is the increased size of the block in the latter from 1 MB to 8 MB, allowing for more transactions per block, and ultimately allowing the coin to scale. In 2018, the maximum block size was again increased to 32 MB, even though the actual sizes have remained much smaller. The market cap for Bitcoin Cash currently sits at less than $10 billion at time of writing, with Bitcoin at over $600 billion.

As of block 687284, Taproot signalling has reached 1815 blocks this period, guaranteeing that absent very deep reorgs, it is guaranteed to lock in. Following that, it will activate at block 709632, probably around mid-November 2021. ?

The Taproot update proposal was released in January 2018 by Bitcoin Core developer Greg Maxwell, and on 12 June 2021, three years later, the 90% threshold of blocks mined with a support signal from miners was met. It means that 1,815 of the 2,016 blocks mined in the two-week period contained a piece of encoded information left by miners, showing their support for the upgrade. This voting mechanism was called the Speedy Trial.

Miners and nodes in the Bitcoin network have until November to update their software to Bitcoin Core 0.21.1, the newest version of Bitcoin Core that contains the latest improvements. Taproot will activate when Bitcoin reaches a predetermined “block height” of 709,632 in November.

This is where things get really technical. The upgrade seeks to introduce increased privacy for multisig transactions, and the potential to scale smart contracts. One of the main changes to the network is the replacement of Bitcoin’s current elliptic curve digital signature algorithm (ECDSA) with Schnorr signatures.

ELI5: Bad people can currently tell when you’re using multisig signatures, which are more secure, from monosig transactions, which are less secure. This information could help them do bad things. Taproot stops this happening.

Derek Lim, on Hackernoon, explains that if a 7-of-7 multisig address wants to make a transaction, it would require the generation of seven pairs of digital signatures and public keys on the network. By aggregating these seven signatures into one signature of the same length as a Monosig, the Schnorr signature drastically improves efficiency on the network.

The Schnorr signature can also facilitate complex smart contracts on the Bitcoin blockchain by enabling discrete log contracts (DLCs). And it could also help scale layer-2 payment channels like the Lightning Network, enabling instant transactions on the Bitcoin network.

Miners unanimously voted for Schnorr and the Taproot upgrade and it seems to have a lot to offer. But will this translate into a rise in demand? 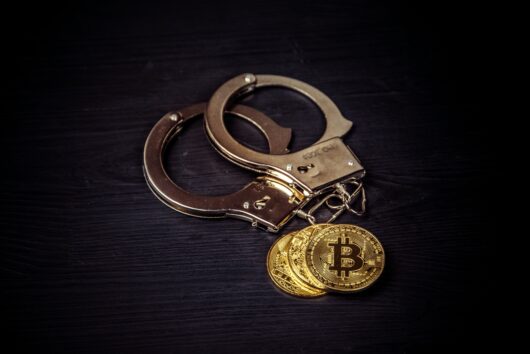 Financial Crime in 2022 and beyond