The week in review: Ethereum-based game Decentraland is here

The use of blockchain technology in sport continues to gain momentum, more world leaders push for faster cryptocurrency regulation, and a highly-anticipated virtual game on Ethereum has landed. Find out what made the biggest headlines this week in the cryptosphere.

Last week saw the tragic demise of Andrew Yang’s White House ambitions. Given the passion he inspired from his supporters – the so-called ‘Yang Gang’ – it was never going to be long before we had someone trying to fill the void.

That man seems to be Presidential candidate Michael Bloomberg, a former New York City mayor and founder of Bloomberg L.P.. His campaign has published a financial reform plan advocating for greater consumer protection measures and an enhanced financial system. Among some of the recommendations in the plan includes creating a regulatory sandbox for startups and “providing a clear regulatory framework for cryptocurrencies.”

A passage from the proposal states: “Cryptocurrencies have become an asset class worth hundreds of billions of dollars, yet regulatory oversight remains fragmented and undeveloped. For all the promise of blockchain, bitcoin and initial coin offerings, there’s also plenty of hype, fraud and criminal activity.”

Bloomberg’s plan suggests clarifying which agencies are responsible for overseeing the crypto space. It also creates a framework for distinguishing between securities and tokens, to protect consumers from cryptocurrency-related fraud, clarifying the tax regime, and defining the requirements for financial institutions in the space.

The list, published on 19 February, features well-known firms like Amazon, Microsoft, JPMorgan, Google, along with crypto companies Coinbase and Ripple. Half the firms on the list are newcomers, including the UN, China Construction Bank, Square, and Russia’s National Settlement Depository.

The UN is a particularly interesting addition given its influence. It follows an announcement made last year by secretary-general António Guterres announced that the organisation must embrace blockchain technology: “For the United Nations to deliver better on our mandate in the digital age, we need to embrace technologies like blockchain that can help accelerate the achievement of Sustainable Development Goals.”

Michael del Castillo, who covered the first Blockchain 50 list last year, discussed how blockchain has enabled big global companies to process complex tasks far easier and faster than before: “Blockchain started as a way to move bitcoin from point A to point B but it is now being used by a host of big companies to monitor and move any number of assets around the world as easily as sending an email.”

One million UEFA tickets to be distributed via the blockchain

According to an announcement this week, the Union of European Football Associations (UEFA) plan to distribute over one million football match tickets via a blockchain-enabled mobile app. The organisation explained the new ticketing system will make “entry into the stadium, smooth, safe and secure.”

The blockchain-based mobile ticketing app works toward preventing ticket duplication and replication by “QR codes only being activated by Bluetooth once fans are in close proximity to the stadium.” The app will reportedly be available for download on Android and iOS toward the end of May.

According to UEFA, “Supporters who purchase ‘Follow my team’ tickets will receive their mobile tickets only once their team has qualified for a specific match. The ability to deliver mobile tickets to fans close to matchday will considerably enhance the fan journey, as fans will no longer be required to visit ticket collection points to exchange ticket vouchers.”

More and more event organisers and sports associations are turning to blockchain technology to implement more efficient and cost-effective ticketing systems. Blockchain is also being used to enable fans to feel closer and more part of the game by affording them opportunities to vote on certain club decisions through specific football club tokens.

There’s been mounting concern among world leaders that as cryptocurrencies and other digital assets continue to gain traction, financial markets are at risk of crumbling. Randall K Quarles, Chair of the FSB and Governor and Vice Chairman for Supervision of the US Federal Reserve, is pleading to regulatory bodies to increase their focus on the impact of crypto on the banking industry.

In a letter to finance ministers and G20 central bank governors, Quarles wrote: “Technology is changing the nature of traditional finance; the non-bank sector has grown, and requires deeper understanding and coordination among the supervisory and regulatory community. Pressures that can lead to market fragmentation exist. Concurrently, important supervisory and regulatory issues require attention.”

Indeed, the speed of regulation has not caught up with the amount of innovation in the space. Adequate regulation is of utmost importance to ensure the safety of all players in the finance and crypto industry.

Decentraland, a virtual reality game built on the Ethereum blockchain, is officially open to the public. The game allows users to connect their Ethereum wallets and purchase virtual real estate in the form of a non-fungible token (NTF) called LAND.

All transactions on Decentraland are recorded on the Ethereum blockchain and token holders have full control over the virtual property that they possess. Builders are able to use Decentraland’s software development kit (SDK) to create interactive 3D scenes on their purchased land without knowing how to code. The marketplace allows players to trade their LAND tokens, along with accessories, wearables and names for their avatars.

To celebrate the launch, the game is currently hosting a treasure hunt with $100,000 worth of virtual items to be found, including LAND tokens, wearables, CryptoKitties, and more.

Playing the game? Let us know your thoughts about it on Twitter. 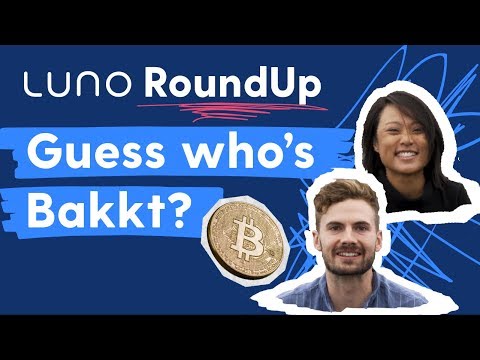 The Luno RoundUp is back! Check out what went down while we were on a break, plus your fix of this week’s crypto news. September 12, 2019 · 3 minute read