All eyes have been on bitcoin this week as the mighty crypto continues to rise, hitting $15,000 yesterday. MicroStrategy and Square are revelling in the news, seeing gains of over 32% since their big investments earlier this year. Elsewhere, Australia’s reserve bank has chosen Ethereum to issue its wholesale CBDC.

Catch up on this week’s biggest crypto stories right here.

The price of bitcoin has now sat above the $10,000 mark for over 100 days, and we continue to see the price rise to even greater highs.

Jason Deane, bitcoin analyst at Quantum Economics said: “People have made a big deal about the fact that this is Bitcoin’s 100th day above $10,000, but the reality is that for many Bitcoin proponents it was only ever a milestone to pass on what is now, in my view, an inevitable and unstoppable upwards trend.” (Above: Bitcoin’s price over the past 24 hours. Source: CoinMarketCap)

On 29 September this year, bitcoin set a new record of 63 consecutive days of opening and closing with a value above $10,000. Its remarkable run has been attributed by some to its newfound appeal to institutional investors, something not seen during its previous runs.

With bitcoin hitting new highs, the decision by a number of companies to convert their cash reserves into the cryptocurrency seems to be paying off. MicroStrategy and Square have made 32% and 38% profits respectively on their bitcoin investments to date.

MicroStrategy and Square are two of bitcoin’s primary institutional investors, and the fact they’ve both enjoyed returns above 30% shows us that while they took a huge investment risk, it’s paid off – at least, for now.

MicroStrategy invested a total of $425 million in bitcoin spread over two major purchases in August and September this year. It invested at an average purchase price of $11,111. Bitcoin’s price increase has set a new gain of $133m for MicroStrategy, with the total value of its bitcoin currently at $558m. MicroStrategy CEO, Michael Saylor has said bitcoin is digital gold and plans to stick with the investment for the long run.

Square followed their lead with a $50m investment in October. It’s since made an $18m profit on its investment to date, with the total value of its BTC holdings now at $68m.

“We believe that Bitcoin has the potential to be a more ubiquitous currency in the future,” said Amrita Ahuja, Square’s chief financial officer. She added that as bitcoin, “grows in adoption, we intend to learn and participate in a disciplined way. For a company that is building products based on a more inclusive future, this investment is a step on that journey.”

Sam Bankman-Fried, founder of crypto derivatives exchange FTX, is among one of Joe Biden’s top campaign contributors with a $5.2 million donation. His largest contribution came from Bloomberg LP with a staggering $57.5 million donation. FTX comes in second with $5.2m, just behind Google’s parent company, Alphabet with $6.3m.

Crypto researcher Adam Cochran noted that instead of going to Biden directly, FTX’s donation went to a political action committee (PAC) based out of Silicon Valley. He said, “That can be either top ticket support or corporate lobbying.”

To be fair it was a donation from the company to a super PAC based out of Silicon Valley that was focused on many down ticket races. That can be either top ticket support or corporate lobbying.

Either way I’m fine with it, but some people will foam at the mouth without context

As the results trickle in, it’s appearing more likely that Bankman-Fried is backing the winning candidate. At time of writing, according to the Associated Press, Biden remains firmly in the lead with 264 electoral college votes to Trump’s 214.

Biden only needs six more electoral college votes to become the 46th US president, and a crypto exchange lent a helping hand in getting him there.

Almost $1bn in bitcoin from the fourth-largest wallet has moved

According to BitInfoCharts 69,369 bitcoin, worth approximately $955 million, moved out of the fourth-largest bitcoin wallet on 2 November. 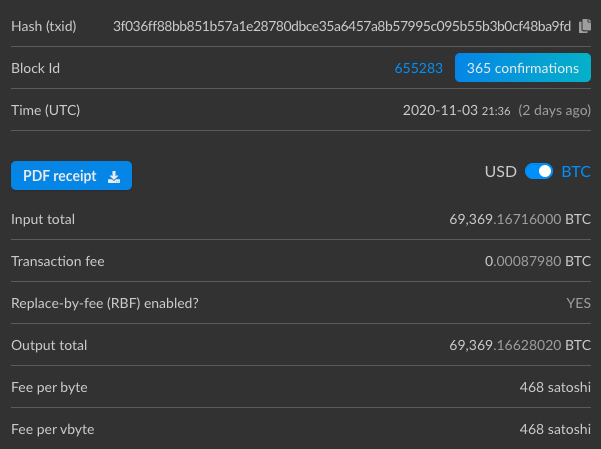 This marks the wallet’s first outflow activity since April 2015. In September, Vice reported the address had been passed among hacker circles attempting to crack the wallet and access the bitcoin – with no successful attempts.

The Reserve Bank of Australia (RBA) has begun exploring the potential use of a tokenised central bank digital currency (CBDC) to be powered by the Ethereum blockchain, with findings expected to be presented in early 2021.

The RBA has partnered with Australia’s two largest banks and leading Ethereum software company ConsenSys, headed up by Joseph Lubin, one of Ethereum’s co-founders.

RBA assistant governor Michele Bullock explained that the purpose of the research project is to test the viability of a CBDC for wholesale financial markets involving transactions between institutions like corporations or other banks.

She said: “While the case for the use of a CBDC in these markets remains an open question, we are pleased to be collaborating with industry partners to explore if there is a future role for a wholesale CBDC in the Australian payments system.”

The central bank hasn’t indicated any interest in a retail CBDC, which would encompass services provided to the general public. In its September paper, the RBA praised the efficiency of Australia’s new payments platform (NPP). Diddy (hip) hops on the DeFi train, a top English football club goes non-fungible, and there was more crypto adoption for major institutions. May 24, 2021 · 3 minute read